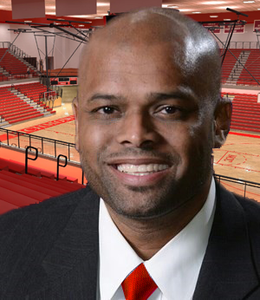 Richmond – Richmond High School is naming a new leader to help the boys varsity basketball team return to the top of the North Central Conference.

Coach Wright is no stranger to big time basketball expectations, as a Richmond High School student he played point guard for legendary Coach George Griffith and in 1992 he led the Red Devils to the IHSAA State Championship. While attending Bradley University, Coach Wright earned a bachelor’s degree in Elementary Education and as an all-conference guard, he led the Bradley Braves to an NCAA Tournament appearance in 1996.

Following the close of his playing career, Wright chose the teaching and coaching profession as a way to “pay it forward and give back to the community!” While growing up in Richmond, Wright stated that “our parents instilled within us the importance of education at an early age. It was to come home, do your homework, change out of your school clothes and only then, could we go outside to play.”

In the Wright family, extra-curriculars were secondary to academic achievement. With his return to Richmond, Coach Wright is looking forward to implementing those same values into his role as RCS Director of Student Support. As director, Wright stated that his focus will be on improving the social/emotional learning experience of all RCS students. With the support of many community partners, Wright will lead mentoring initiatives designed to uplift and engage students in positive behavior, goal setting, and community service. He is confident that “with the help of the entire Richmond community, in time, we (Richmond) will be back on the map!”

Coach Wright will begin his position in July and is in the process of finding a home here in Richmond with his wife, Monica, and their son, William E. Wright III (Trey).